LAS VEGAS — When Dustin Byfuglien has his eyes set on what he wants — whether it’s an open shooting lane or a lackadaisical opponent at open ice primed for a hit — there’s no dialing back to half-speed. That extends to pregame warm-ups, specifically when Byfuglien is set on simply getting on the ice.

After the Winnipeg Jets walked out of the tunnel prior to Game 1 of the Western Conference finals, Byfuglien was about to step onto the ice when he sensed teammate Nikolaj Ehlers lurking behind his right shoulder. So what did Byfuglien do?

Don’t get in Big Buff’s way when it’s time to start the Western Conference Final. pic.twitter.com/1H5tJdWTIy

The defenseman (modestly listed at 6-foot-5, 260 pounds) used his right arm to shove the 22-year-old winger onto the bench, barely flinched and coasted right onto the ice. For Ehlers, a slight 6-foot, 172-pound Dane known for his elusive speed, it could not have felt pleasant as his stomach coiled over the board.

“It’s something he always does,” Ehlers said three days later. “Now I’m ready for it. I’m going to brace myself next time. I will be ready.”

This is not the first time Ehlers has been Big-Buffed. In Game 2 of the second round, Byfuglien got so excited celebrating a goal with teammates that he literally clocked Ehlers in the face.

Dustin Byfuglien literally punching his teammates in excitement after the tying goal. pic.twitter.com/BonYy9smde

“It actually was pretty hard,” Ehlers said afterward “That’s just the way he is. He was punching everyone in the face. Next time, I’ll be more careful.”

That’s the thing about Byfuglien: He has been in this league for 13 years, including long playoff pushes with the Chicago Blackhawks; even still, at age 33, he’s still finding a way to surprise anyone around him (especially those within striking distance).

Through these playoffs, Byfuglien has been an unrelenting highlight reel. One could watch all of Byfuglien’s 395 minutes and 13 seconds on the ice and probably be entertained by at least four hours of the footage. In the Jets’ most recent outing, Byfuglien did his best impression of a bar bouncer, coming in at the end of a scrum to peel away two Golden Knights. He grabbed the jersey of Tomas Nosek (listed at 210 pounds) in his left hand and Colin Miller (196 pounds) in his right and extracted them from the situation with one tug.

Try to hit Dustin Byfuglien at your own peril pic.twitter.com/22RHUrPKHl

In the second-round series against Nashville, Byfuglien came in to protect Kyle Connor and manhandled at least three Predators at once. In the first round against the Wild, Byfuglien checked forward Mikael Granlund along the bench and leveled Minnesota captain Mikko Koivu with a shoulder-to-shoulder check — in a span of nine seconds.

“There’s a lot of pickup trucks on the ice,” Jets teammate Ben Chiarot explained. “Dustin is an 18-wheeler. He has 50 pounds on everybody. The biggest guys on the ice are 225, 230, and he’s got them in a landslide. He could be playing in the NFL just as easy as he is the NHL.”

And that’s not even getting into Byfuglien’s lethal shot from the point (his offensive prowess is rooted in several stints in which coaches have experimented with him at forward). Even some of Byfuglien’s goals become memes; such as his laser in Game 5 against Nashville, when four Predators lined up between Byfuglien and goaltender Pekka Rinne and not one of them stood a chance.

Byfuglien leads all defensemen in scoring this postseason (5 goals, 10 assists through 15 games) while shouldering a yeoman’s 26 minutes, 21 seconds per game. Consider the next-closest Jet is Jacob Trouba at 21:53. Byfuglien’s average shift is three seconds shy of a minute.

Byfuglien, an alternate captain for the Jets, is not one to talk to the media often and has rarely been available these playoffs. He is often seen on the periphery of the locker room — and if you catch him in a moment alone with a teammate, you’re more than likely to see him chirping or cracking a joke.

A fun exercise is listening to Jets teammates explain what they tell their buddies back home when asked about what it’s like to play with Big Buff.

“It’s an experience,” Jets captain Blake Wheeler said. “He’s a very unique guy both on and off the ice.”

“He’s an interesting guy,” Chiarot said. “That’s the best way to put it. He can be your best friend one day, and the next day, you just want to run him through the wall.”

“If my buddies ask about Big Buff, I just start laughing, just like I just did,” center Andrew Copp said. “He’s one of a kind, for sure.”

“There’s a lot of pickup trucks on the ice. Dustin is an 18-wheeler. He has 50 pounds on everybody. The biggest guys on the ice are 225, 230, and he’s got them in a landslide. He could be playing in the NFL just as easy as he is the NHL.”

If all of these sound like euphemisms, well, it’s because it’s hard to pin down Byfuglien — and teammates are wary of falling into the trope and painting him as a caricature. Winnipeg players say there are nuances you don’t see. Wheeler explained how he became a better leader by being around Byfuglien:

“I’ve learned a lot from him in terms of he doesn’t have any bad days,” Wheeler said. “Good game, bad game the night before, he’s just always got the same smile on his face, laughing, making jokes. I can be a little more intense. So that’s rubbed off on me a bit, having a guy who is loose and enjoying it and making everyone else feel comfortable and having fun. That goes a long way.” 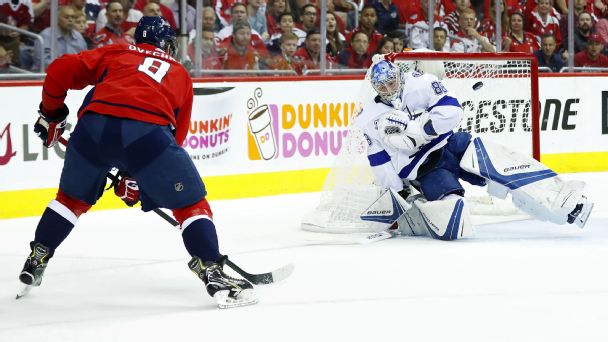 Greg Wyshynski and Emily Kaplan are on opposite coasts, and they delve into the Vegas-Winnipeg and Tampa Bay-Washington conference final matchups. Brian Boucher of NBC talks goalie play, and the crew discuss the impact of new sports gambling regulations on the NHL. Plus, all of your favorite segments of the week! Listen »

Copp, who has been on the Jets for four seasons and earned a regular role in 2016-17, illustrated how Byfuglien leads by example:

“In the years past, when we’ve been out of the playoff race in mid-March, it can be tough,” Copp said. “Especially for the older veteran guys who want to win. That’s also when the young guys are trying to prove themselves that they still belong here after tough years like that. But he always brought a good attitude at the rink and tried to keep things light and loose instead of worrying about not making the playoffs. He’s pretty much always in a good mood. He tries to keep things as light and loose as possible because that’s how he plays his best.”

Adds Chiarot: “He’s always happy. He gives you s— anytime he thinks he needs to, but he also knows when not to do it. That’s what makes him a good leader.”

As for the physicality — well, opponents just try to do their best to brace themselves. There’s no containing Byfuglien. Golden Knights forward Pierre-Edouard Bellemare recalls a few times he hit Byfuglien while a member of the Philadelphia Flyers.

Bellemare went on: “To be honest, it’s not like he’s trying to hit. You come and he’s in your way and he just kind of just pushes you away, but there’s so much power it just looks like a gigantic hit.”

And then there’s the one man tasked with getting under Byfuglien’s skin this series: Vegas fourth-liner Ryan Reaves, who relishes his role as an enforcer. During one off day this series, Reaves manned his locker as he answered a series of questions about Byfuglien, including about when they collided in Game 1.

“That was two brick walls hitting each other,” Reaves said.

“Is he bigger than you?” a reporter asked. “Oh, by 50 pounds maybe,” Reaves replied.

And then a reporter asked if Reaves thought Byfuglien was the strongest player in the league.

Reaves didn’t pause. “I’m the strongest player in the league.”

“Is he the second-strongest?” a reporter followed up.

It’s unclear if Reaves treated this as psychological warfare. But as he smiled through the rest of the conversation, it seemed clear he probably knew who was actually No. 1.